< BACK TO TESTIMONY PAGE

On 28 April 2011, my two daughters and I went on a road trip within the United States (from Georgia to Virginia). This was the day of one of the biggest tornado outbreaks in US history. A few days before we left for the trip, I had the urge to just read Psalm 91 and Psalm 23 again with my children. We read the scriptures and quoted verses out loud, and then I read it again to my girls as they drifted off to sleep.

On the day of the trip itself, we encountered horrendous storms with awfully dark clouds, torrential winds and hail as we drove through Virginia and Tennessee. In my heart, I felt that I needed to just drive through the storms and did so by God’s grace.

We stopped to eat in north Georgia. I wanted to hurry and eat so that we could get back on the road quickly. But in my heart, I felt the Lord telling me to slow down and let my girls eat and relax, and not to rush them.

When we left the restaurant, I felt the urge to get gas at the gas station next door. I didn’t know why because my gas tank was already more than half full. But I did it anyway. Then, we got back on the highway and continued our trip.

After travelling less than a mile, the traffic came to a complete stop. We waited for a while and then realized that something serious had just happened right up ahead.

A large tornado had just torn through the town directly in front of us only minutes before! It had traveled and caused destruction on the very section of the highway that we were going to travel on. By God’s grace, the Lord had us stop and get food and gas, slowing us down enough to keep us from the destructive tornado! We missed the tornado by only three to five minutes.

We were stuck on the highway for five hours as emergency crews began to emerge from everywhere to help the victims of the tornado. We prayed in the Holy Spirit for the victims and sang praises to the Lord for His saving grace. Although we were in the car and couldn’t move for five hours, we had enough gas in our car to keep the DVD playing (for the girls) for most of the five hours. The Lord had prepared us without me even knowing it. When packing for the trip, I had packed extra water, food, blankets, DVDs and more for the girls.

While we waited in the car, another storm arose and traveled over us. It shook our SUV violently and all those on the radio said that another tornado was imminent. We were stuck on the highway with no way to exit. The exit up ahead had been torn apart by the tornado.

I began to confess Psalm 91 over us and told my daughters that the Lord would keep us safe no matter what the storm looked like. The Word of God calmed our hearts. We turned off the bad news on the radio and just sang praises to God for His protection, and He protected us. The second storm didn’t produce another tornado! The Lord kept us safe and I am so thankful!

In another incident, on 23 August 2011, my girls and I were in a hair salon in Virginia. They were playing on my computer while I was in the salon chair. As I was about to be done, the building shook violently. We all looked around in confusion but my children began to laugh saying that it felt like an amusement park ride. It was no amusement park ride. It was an earthquake!

Everyone was safe in the salon and we were also not fearful or terrified. Some people were in the mall or at work during the earthquake and some of them ran in terror. Some were in stores where parts of the ceiling began to fall.

The devil intended to cause destruction in our lives in 2011, but the Lord’s amazing power, love and grace made sure that we were always held safe and warm in the secret place of the Most High.

Thank you so much for preaching the true gospel of Jesus Christ. God bless and keep you and your family!

BACK TO TESTIMONY PAGE / BACK TO HOME
close x
download

Enter Your Info Below And We Will Send
You The Brochure To Your Inbox!

Thank you!
Your submission has been received!

Oops! Something went wrong while submitting the form 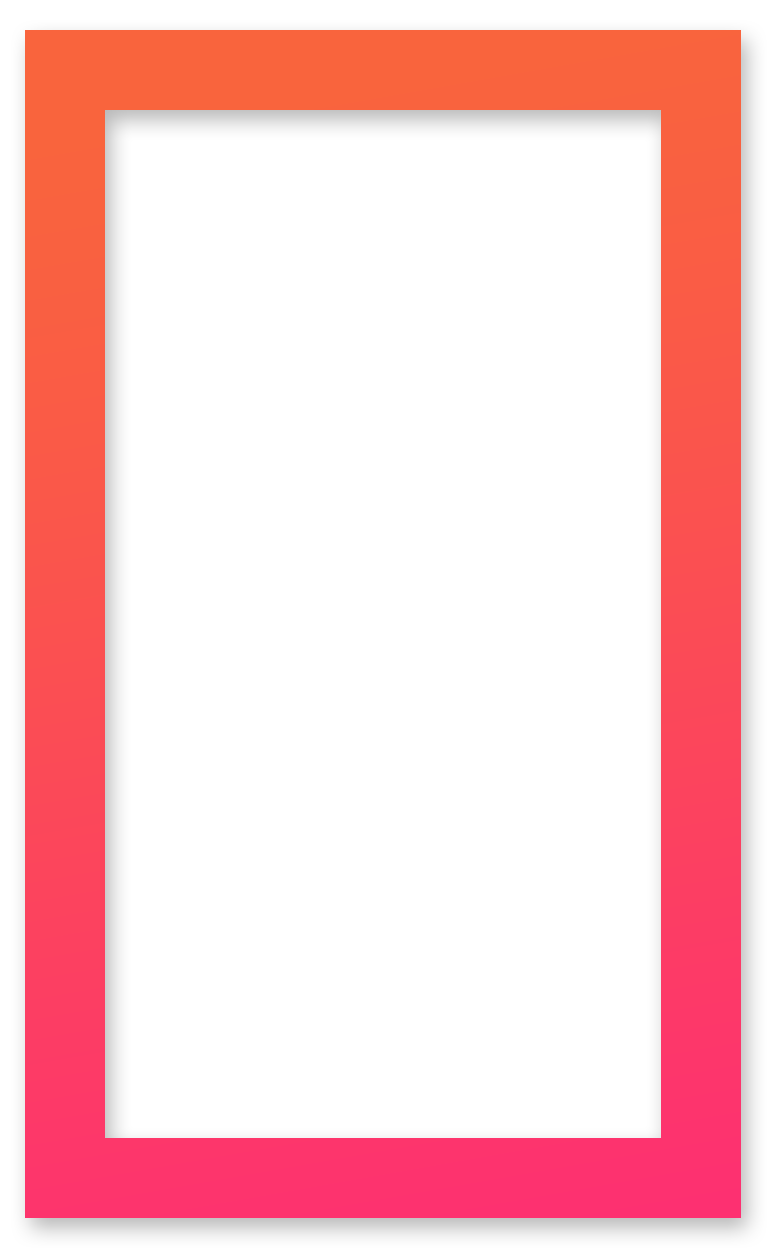 0 PEOPLE ARE PRAYING WITH US

0 PEOPLE ARE PRAYING WITH US

BE PART OF THE MOVEMENT

If you’ve been watching the news, you’ll know that frightening events are very much part of the world we live in. Day in, day out, we hear and read stories of terror attacks, senseless shootings, and devastating natural calamities that cause growing fear and worry in the hearts of many.

But as the world around us gets darker and darker, our Lord Jesus assures us that His church of believers will get brighter and brighter (see Isa. 60:2). How will this happen? One way lies in an answer He has given us for the perilous times we live in—Psalm 91.

Psalm 91 isn’t just packed with awesome promises on God’s protection, it’s also a most powerful prayer of protection for the times we live in.

When we pray or declare Psalm 91 over ourselves, we activate God’s 360-degree and round-the-clock protection over ourselves. We actively abide in the secret place of the Most High—the safest place we can ever be!

As the righteousness of God in Christ, a believer’s prayer “has great power and produces wonderful results” (James 5:16 NLT). Imagine how much more power and results there will be when many believers come together to pray the Word and will of God in Psalm 91!

Through our Pray PS91 movement, many believers from around the world have made a commitment to pray this powerful psalm for thirty days. As they do, they join many others who have experienced how the Lord miraculously rescued them and their loved ones from all sorts of dangers and unforeseen disasters.

Psalm 91 isn’t just packed with awesome promises of God’s protection, it’s also a most powerful prayer of protection for the times we live in.

When we pray or declare Psalm 91 over ourselves, we activate God’s 360-degree, round-the-clock protection over ourselves. We actively abide in the secret place of the Most High—the safest place we can ever be!
‍
As the righteousness of God in Christ, a believer’s prayer “has great power and produces wonderful results” (James 5:16 NLT). Imagine how much more power and results there will be when many believers come together to pray the Word and will of God in Psalm 91!
‍
Through our #PrayPs91 movement, many believers from around the world have made a commitment to pray this powerful psalm for 30 days. As they do, they join many others who have experienced how the Lord miraculously rescued them and their loved ones from all sorts of dangers and unforeseen disasters.

Will you join us today? Let God’s protection be a greater reality in your life. It’s time for us to rise up and declare the promises found in Psalm 91 over ourselves, our families, our cities, and our nations!

Read how the power of Psalm 91 became a reality in these lives.

Renee / Virginia, United States
In April, my two daughters and I went on a road trip from Virginia to Georgia and experienced one of the biggest tornado outbreaks in US history...
READ more

Fiona / Singapore
We had no time to react but to cover one another. We also had no safety belts to protect ourselves. We were stunned, and I remembered calling: “Jesus, Jesus, Jesus.”...
READ more

Ada / Nigeria
When I realized what was happening, I was terrified. There was another lady who lived alone and who had been raped and I was afraid that the same would happen to me. In the fear, my mind went blank, but instantly, the well within me burst open and I shouted, “The blood of Jesus,” and began praying in tongues...
READ more

Carina / North Carolina, United States
Caylen was born three months premature. We were told that his survival rate was low. Even if he did survive, he would have significant development delays due to the extreme prematurity...
READ more
0
PEOPLE ARE
PRAYING WITH US

Thank you for committing to pray Psalm 91 over the next 30 days!

Simply click on our specially designed verses below and use them as wallpapers for your mobile device.

Find time each day to pray these verses over yourself, your loved ones, and your nation. 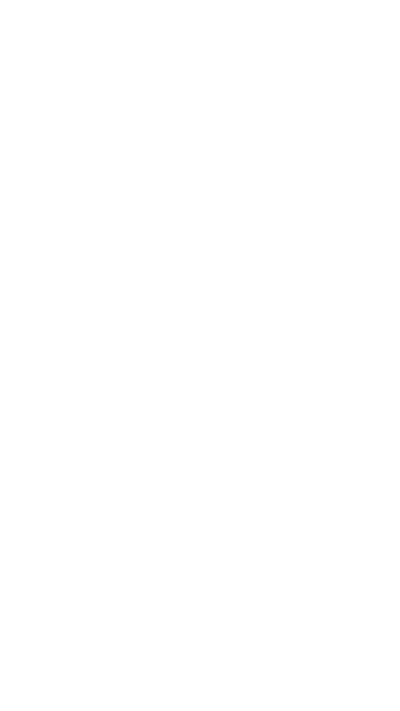 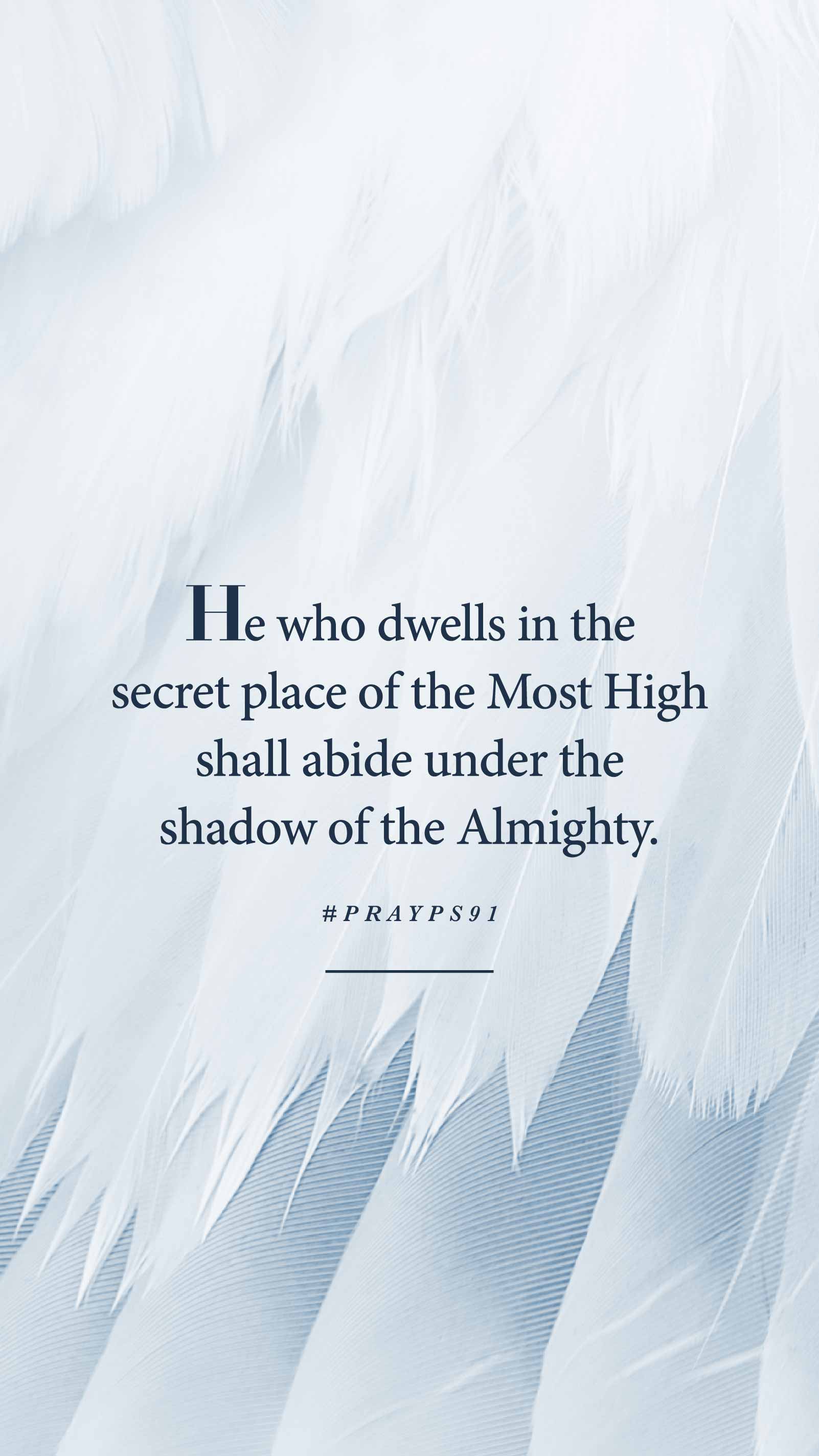 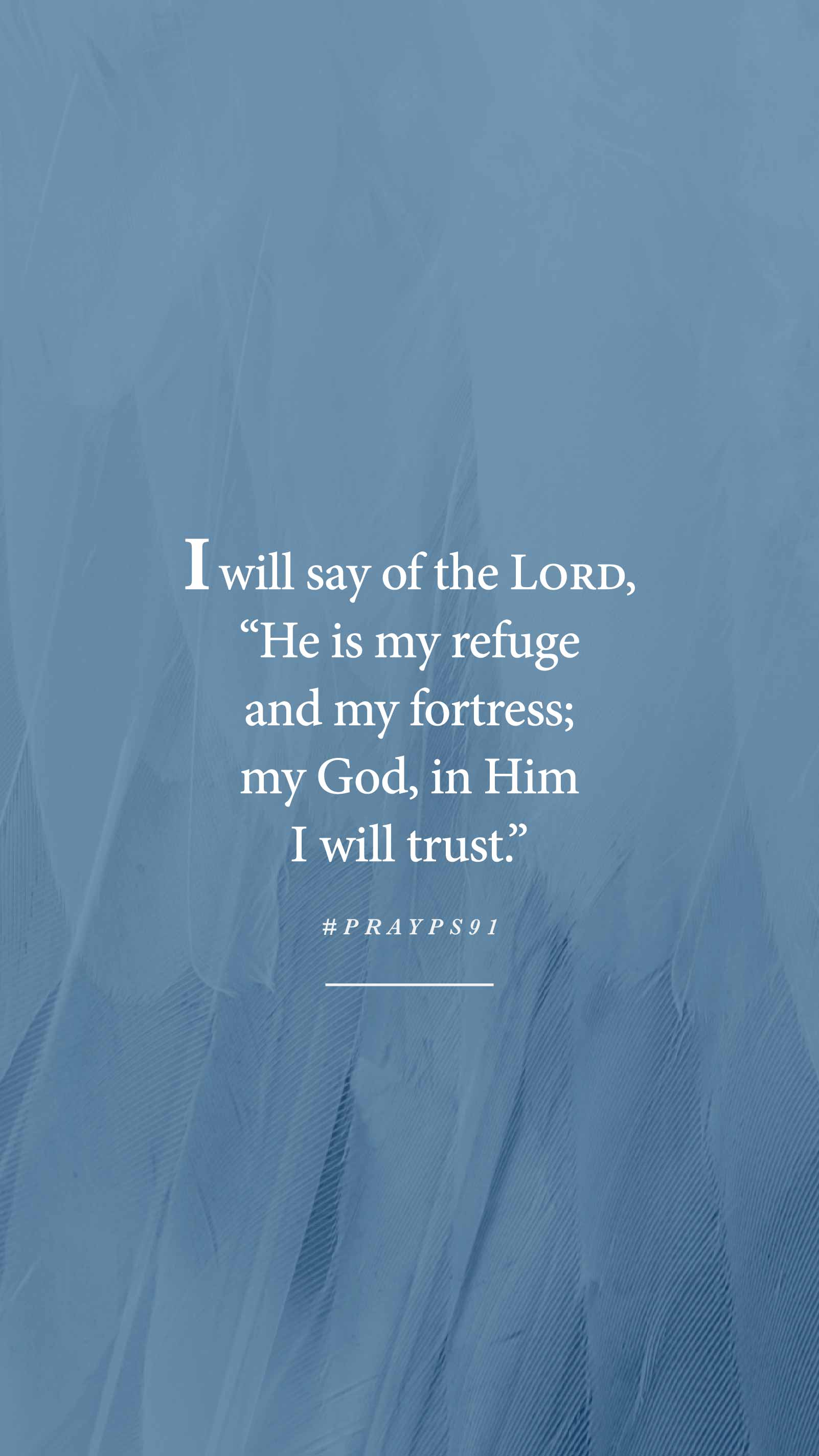 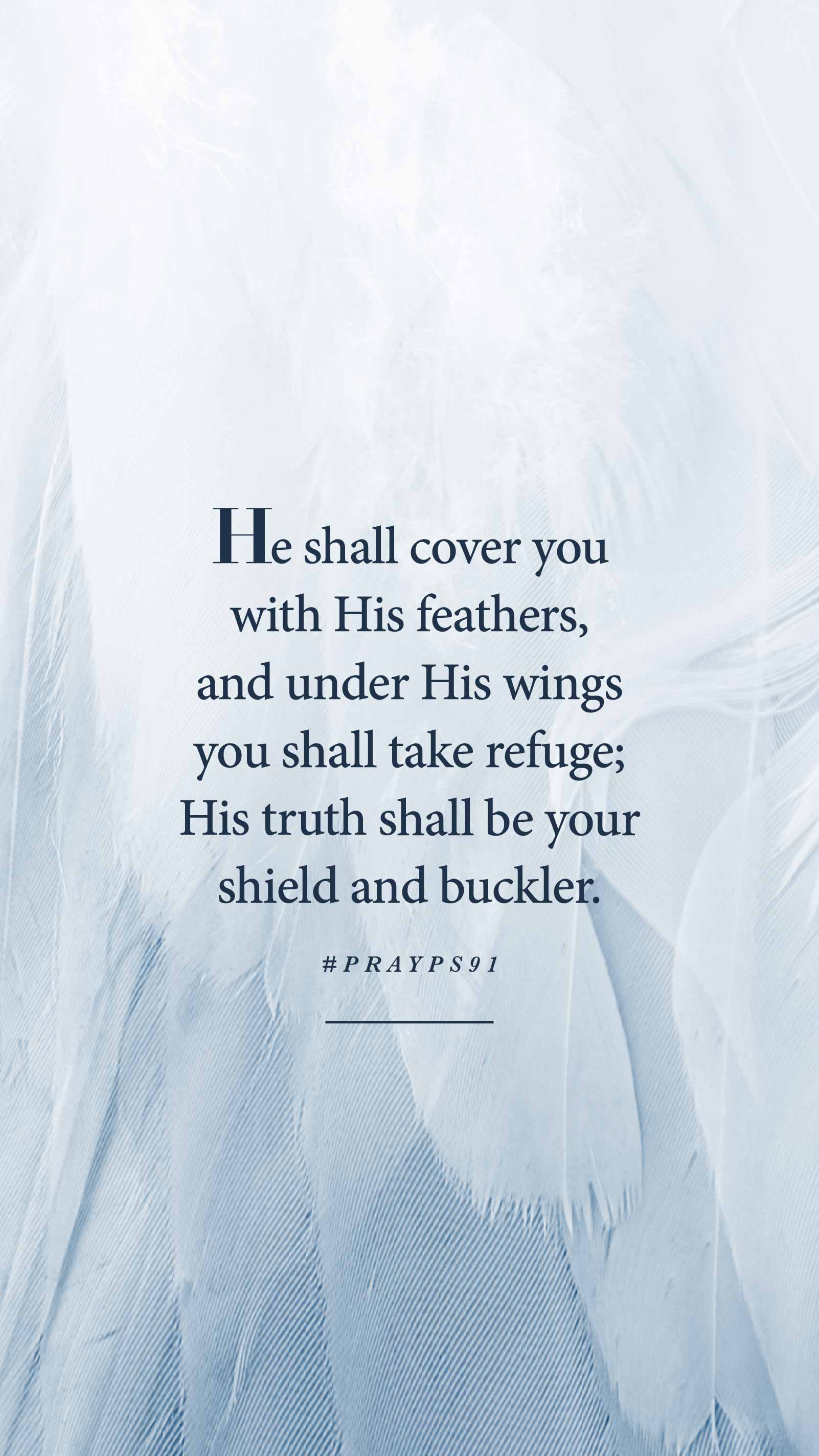 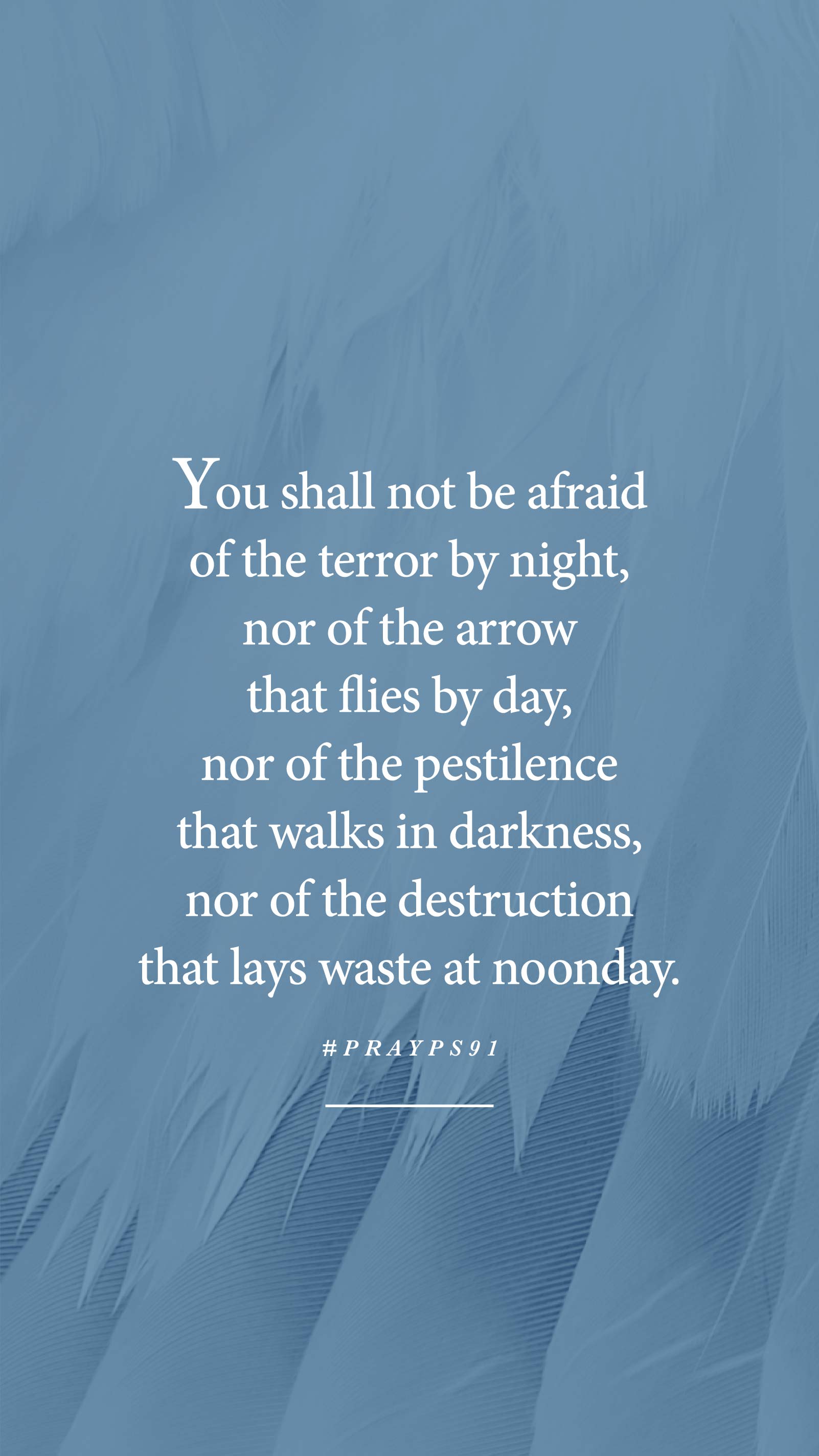 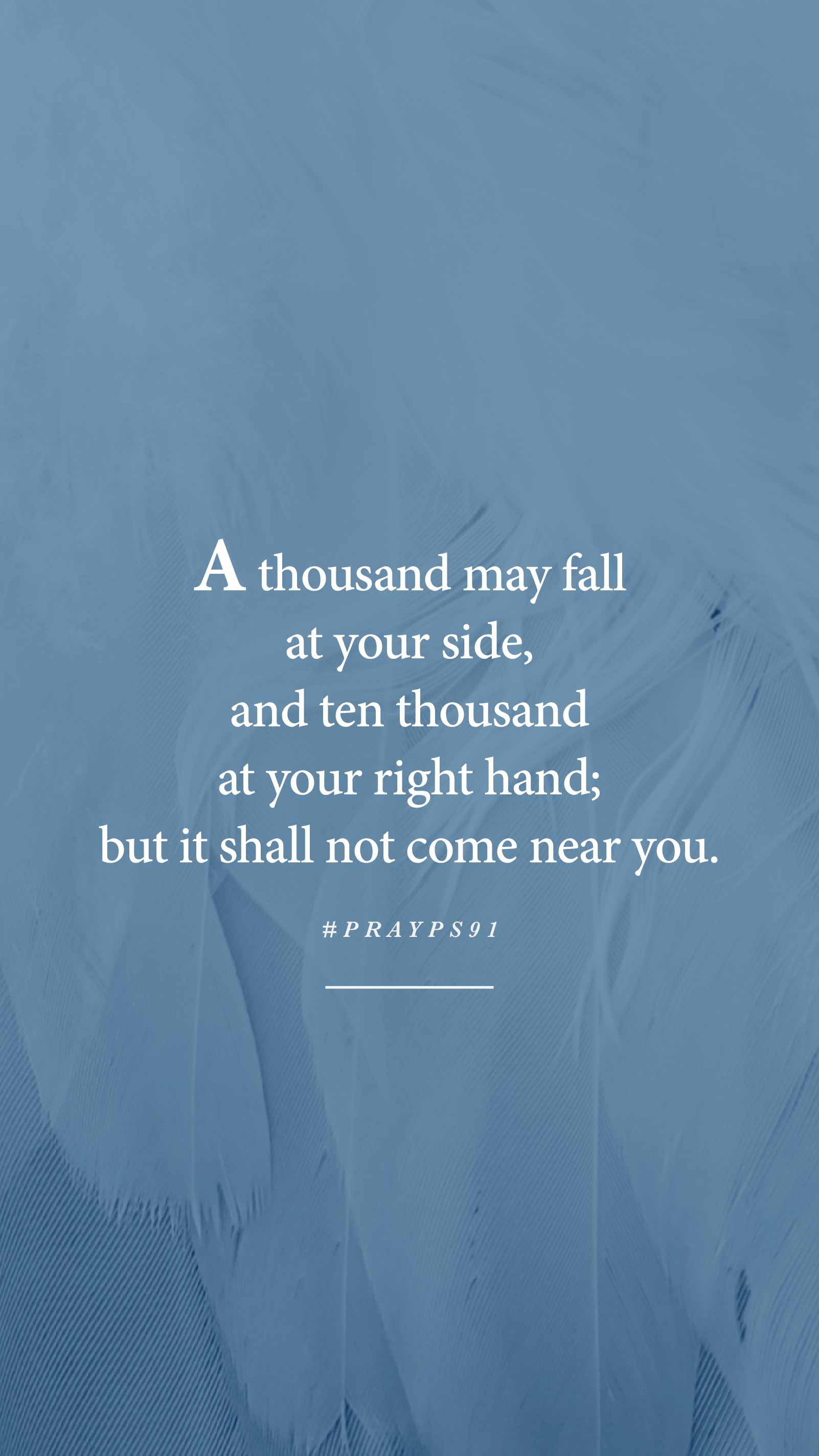 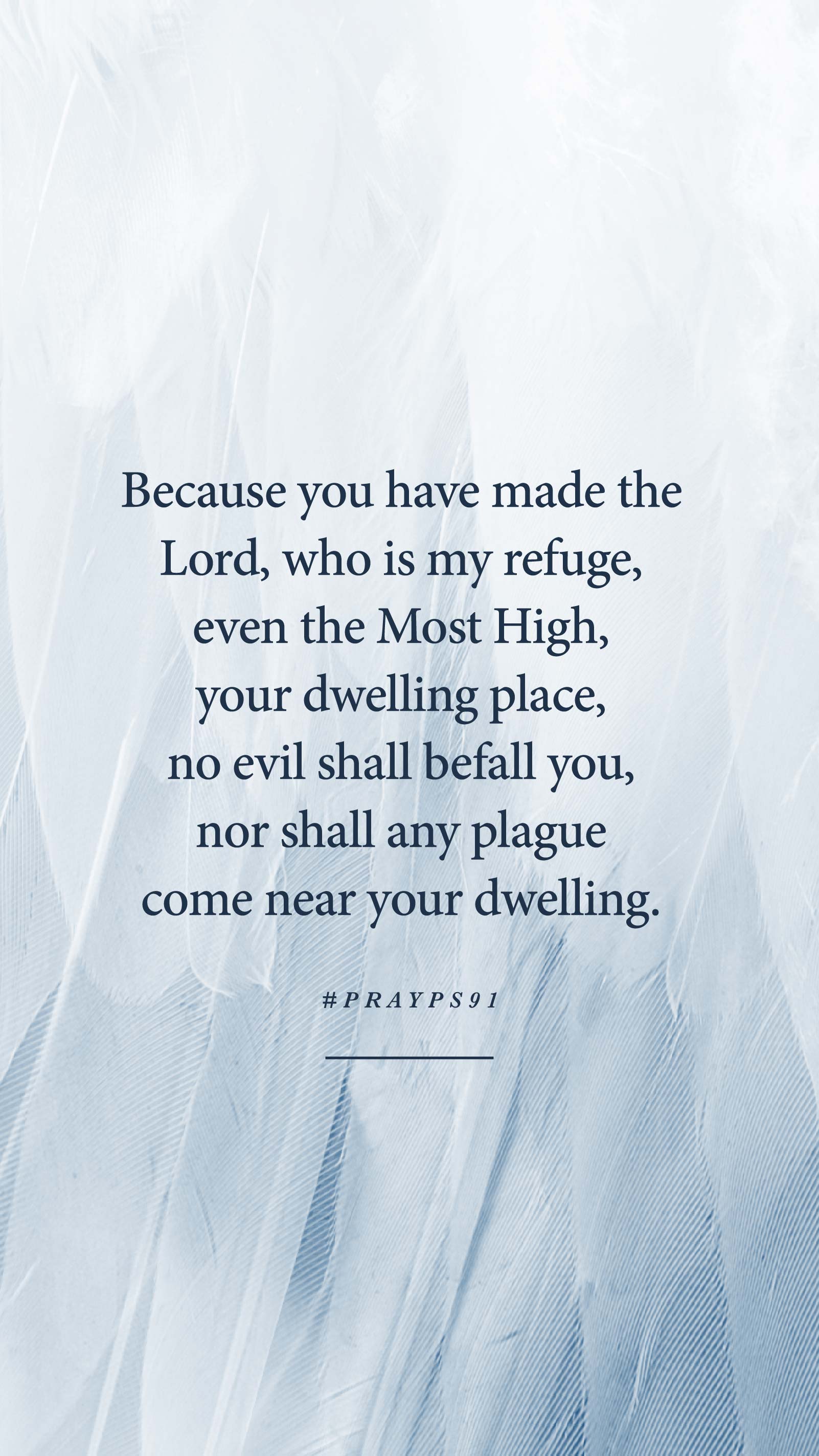 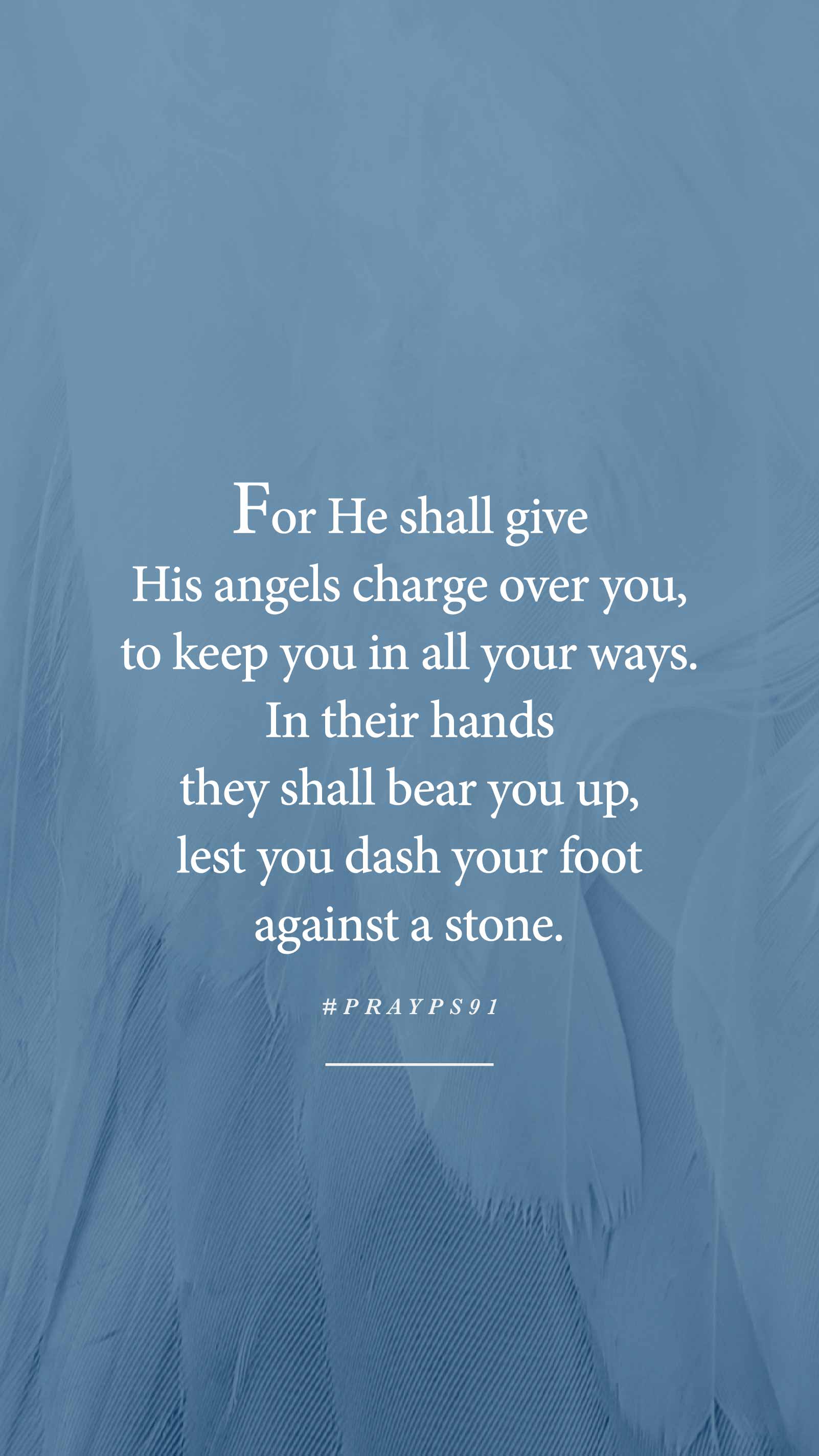 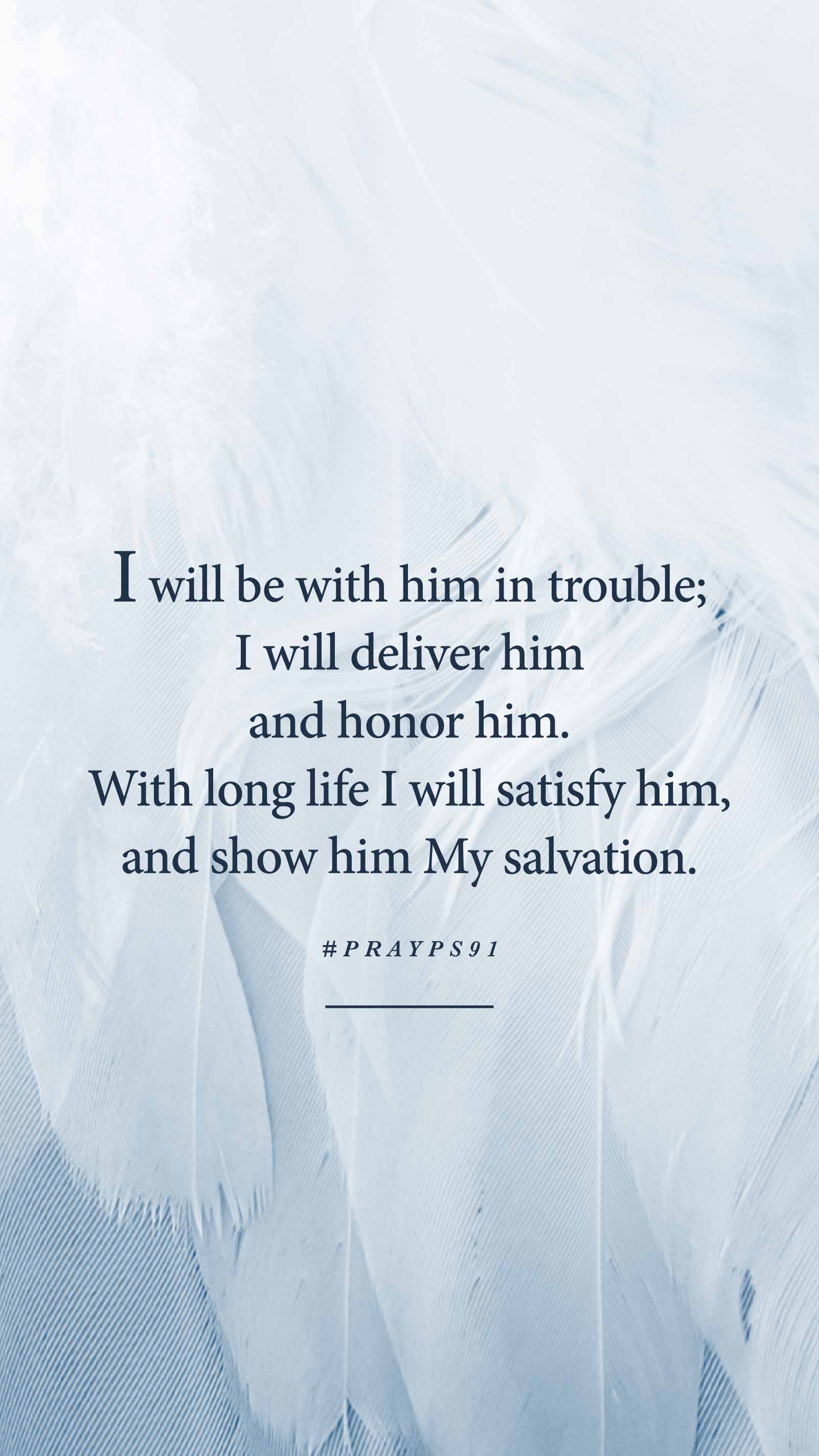 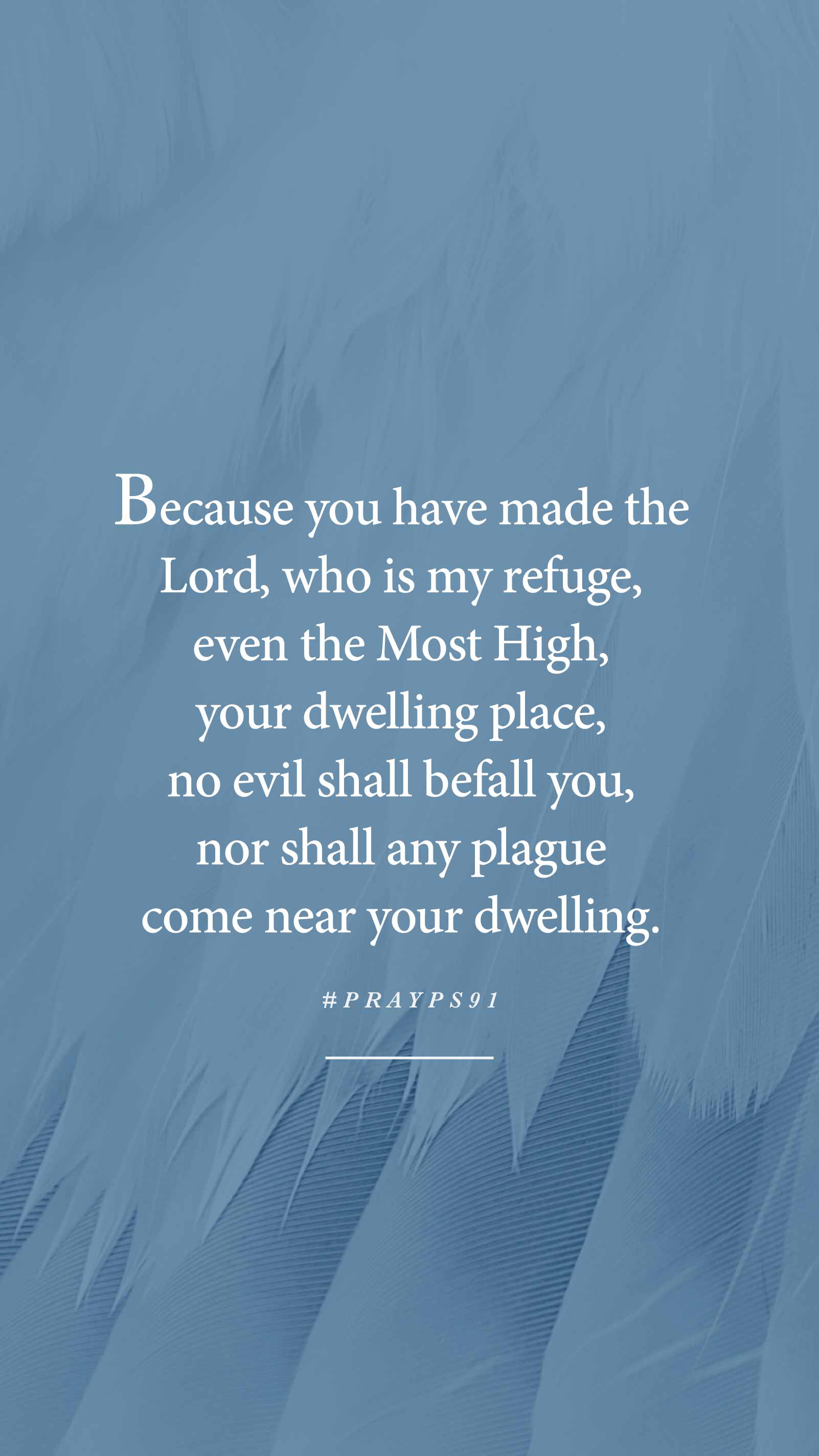 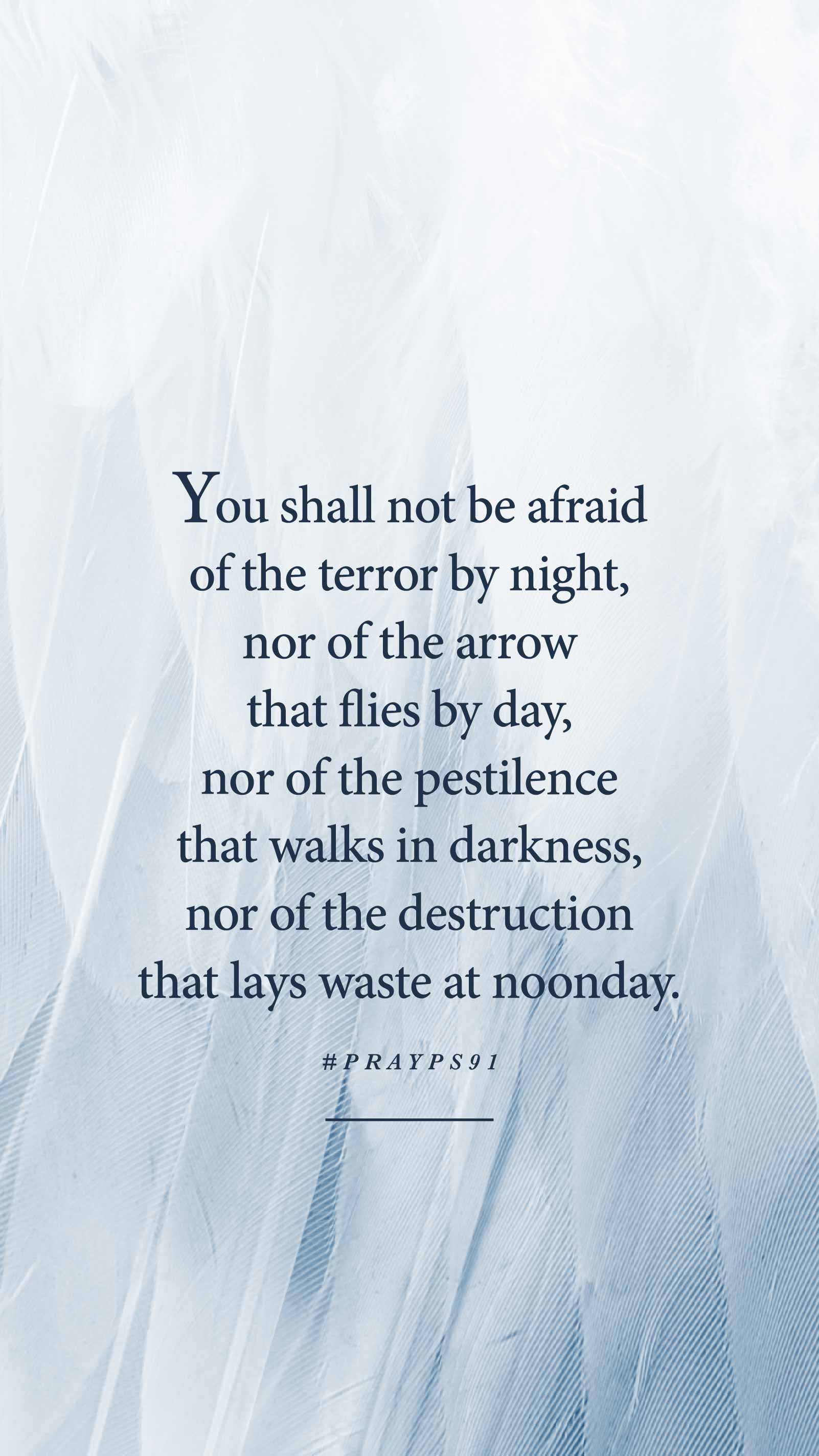 BE AN AMBASSADOR OF THE MOVEMENT!

TELL A FRIEND
“We will see the world getting darker. But as believers, we need not live in fear. Our trust is in our Lord Jesus.”
- Joseph Prince 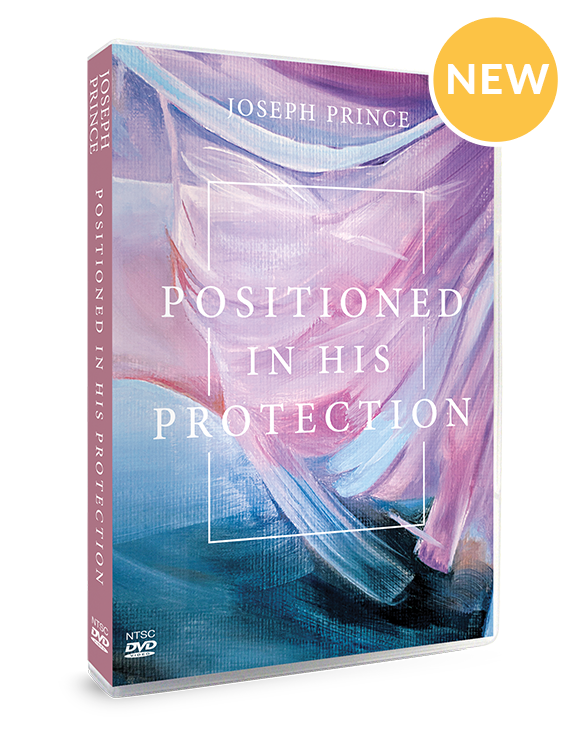 Positioned in His Protection

This month’s latest series, Positioned in His Protection (4-sermon series), will fortify your heart with God’s promises of protection. No matter how dangerous the world gets, no matter how many reasons there are to be afraid, your heavenly Father wants you to know that you can live fear-free, safe, and secure under His wings.